Yesterday, European regulators extended the ban on short selling financial stocks in four countries: France, Italy, Spain, and Belgium. The ban was started on August 12 despite any highly unusual shorting activity up until that time. The ban was originally slated to run for 15 days, expiring today. The extension will run until 11/11/11 for France and September 30 for the other countries, barring any further extensions. While these actions will not stop the slide of European financials, they will highlight the incompetence of European financial regulators. The supposed leaders of the financial markets have thrown up their hands in dismay and cried “Uncle!” almost ensuring that markets will tank by undermining investor confidence. One does not often see a government signal to the world that it has no idea what to do about its economy. It is almost as if their plan is to place a “Please, don’t kick me.” sign on the back of their weakest members.

The short sale bans do not work (the top chart shows the US ban from 8/08) mainly because the underlying company fundamentals (i.e. the value of the company) do not change, but also because today’s breadth of interconnected financial products makes it almost trivially easy to develop synthetic short positions. To create such a synthetic short one would look to build an arbitrage position but simply leave a hole where the banned security would otherwise fit in the portfolio. For example the most direct way to build a synthetic short here would be to short a European financials ETF and then use the proceeds to buy up the individual components, say German, Danish, and maybe Polish financials but not those from France, Italy, Spain or Belgium. The net effect is that one has a short exposure to securities that one is not technically allowed to short. The hitch is that everyone knows this and the European financials ETF becomes hard to borrow, driving up the costs. 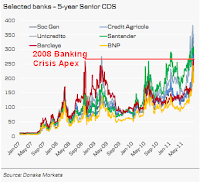 So one could move to a broader index, say global financials or all of Europe, and then fill in more securities on the back side. While the borrowing costs may not be as high as one starts to get further away from the concentrated play, transactions costs rise and a bit of basis risk is introduced. To really minimize borrowing costs one could move into the futures and options markets, however this introduces other risks including roll risk from mismatched timelines. But make no mistake all of these risks are worth it. Another derivative strategy would be to use credit default swap spreads. This chart from Pragmatic Capitalism shows CDS for large banks. One can see just how confident the market is that a short sale ban will work!

A review of the academic literature backs up the theory. Evidence from the short sale ban of financials in the US in September 2008 suggests that these bans actually exaggerate the effect on the banned securities' prices and disrupt the orderly flow of markets. The net effect is that regulators remove liquidity, price discovery, and confidence exactly when the market needs it most. Arturo Bris, for whom I once worked as a teaching assistant at Yale, has an excellent paper where he demonstrates exactly this. Similarly he finds that short activity was not that high in the US at that time either. Arturo noticed that shorting typically happens after a fall in price and not before. So the short sellers definitely do not trigger the fall. Arturo suggests that this may be due to short sales being used as a hedging tool. Without the liquidity from shorts, these stocks become less efficient, reacting more slowly to news than usual. As liquidity dries up in the banned names, relative spreads increase. These conditions set the stage for larger impact costs on trades. In other words, sells may then seemingly have a bigger draw on prices than before the short ban - exactly the situation the regulators were purportedly trying to prevent.

In a paper sponsored by the Q-Group, Beber and Pagano also studied short selling bans around the world. They found remarkably similar results. Although their price results on US financials were inconclusive, Beber and Pagano showed liquidity and price discovery to be much more inefficient during short selling bans. The biggest dislocations occurred for smaller cap stocks and stocks lacking traded options. Presumably, smaller cap stocks would make up small portions of ETFs or indexes, making the above trading techniques slightly more difficult. Obviously, lacking listed options further restricts the ability to place a synthetic short and would thus tend to increase dislocations. The authors even noted Chairman Chris Cox of the SEC on 12/31/08 said of the short selling ban on financials, “Knowing what we know now, I believe on balance the commission would not do it again. The costs appear to outweigh the benefits.”

Fortunately the academic research does not uniformly paint regulators as complete idiots. Bris, Goetzmann,and Zhu find that short selling bans may present less negative skew. While extreme negative pricing events may be just as common under restricted shorting, they seem to be of a slightly less severe magnitude. This finding seems to only apply to extreme events and not necessarily to an ordered retreat in prices. Of course they note that this mitigation of extreme pricing comes at the now familiar cost of market efficiency.

So while placing synthetic short bets on securities with short sale bans in place may not be a riskless enterprise, it is one which I feel more often than not, will turn out to be worth the risk. As we can see, the best way to implement such a strategy is not just to be faster than everyone else, but also to be large enough to absorb any transactions costs or slippage. Thus this may not be the strategy best suited to the little guy investor. So if regulators are teeing up easy opportunities to large institutional, or quasi-institutional, investors at the expense of average investors, whom are they really trying to protect? Just exactly where do the regulators' interests really lie?

Email ThisBlogThis!Share to TwitterShare to FacebookShare to Pinterest
This post is about: arbitrage, europe, financials, markets, papers, politics, regulators, shorting